Since Poe so kindly allowed me to start writing articles for his site as a favor and part of my community service, the very best response I’ve had was to the Most Wanted column, where I talked about the many action figures that I so dearly desired for my collection to sate the addiction, and that’s no surprise: every passionate collector has characters and properties that they’re passionate about seeing in plastic on their shelf. That’s part of the fun of the whole hobby, why everyone gets so excited for SDCC and announcements – the pleasure of having our plastic fantasies realised. (That sounds much worse than I’d intended. My apologies.)

My last unpopular article included a section of Valve plush toys, sadly the only Valve characters currently in toy form – it’s a crying shame that despite so many award-winning popular games we’re yet to see one non-plush toy from Valve. There are a variety of figure-worthy characters from the groundbreaking Half-Life series (Gordon Freeman, Alyx Vance, The G-Man, not to mention all the awesome different creatures) as well as all the characters from the sensational Team Fortress 2 (KA-BOOM!!), and, naturally, we’re crying out for a huge GLaDOS boxed set. The most recent Valve achievement is the sensational Left 4 Dead series, a first-person-shooter-slash-

cooperative-survival-horror-action game in which a team of four survivors brave the zombie apocalypse, working together to reach safety from tens of thousands of the infected, as well as “special” infected, who are more powerful than the normal “zombies.” In this article (starting today, concluding tomorrow!) I wish to talk about my plans for an upcoming Valve/”some other company” cross over to bring these characters to life as toys, bringing not just the survivors from both L4D and L4D2 to toy form, but specifically the zombies, which would be hot sellers even for collectors who aren’t invested in the franchise – who doesn’t love awesome zombie toys?

Prior to that, though, I wish to beg directly at Valve, as a continuation of the “series” started with the glorious Plush Boomer..

If no other L4D characters are made plush, the Tank must be produced – a big, happy, cuddly monster with a smile on its face ready for smashing! As with the Boomer, it needs a sound feature, but the Tank should be a little different: each hand needs a different sound; the left hand playing the Tank music, the other playing the Tank scream/smash sounds, for an authentic adorable Tank experience. Must own!! For hugs!!

Now, on with the actual show:

They swarm and attack in massive hordes, attracted by sound and movement – they are the Infected. Released similarly to the BioShock Little Sisters, the Infected are members of the zombie hordes, the standard zombies guarenteed to sell the most from this line. Several different zombies should be released for each series so collectors can have their own army of zombies, useful not just for L4D but with any zombie property, such as Night of the Living Dead or Resident Evil.

One of the most memorable Special Infected zombies from both L4D games is the big, fat, nasty Boomer – a big, slow, lumbering, sweaty, flatulent blob which isn’t terribly dangerous by itself, but whose vomit blinds players and causes an instant rush of zombies to maim and kill. One can hear the sounds of the Boomer a mile away, with its blaarghing sounds instantly recognisable and horrible – the action figure will definitely need the same, a sound feature built into its obese body, not getting in the way of the articulation. (This is a toy whose legs should probably not be articulated, just in a single pose that enables it to stand, lest its top-heavy-ness cause it to topple all the time.)

Looking very similar to a regular infected but covered by a dark hoodie and able to pounce on its prey from a long distance, the Hunter is a quick and deadly menace with a loud scream that heralds its attack. Like the Boomer, the action figure will demand a sound feature so that one can hear its menacing sounds prior to attack, and full articulation so it can be posed both attacking and pouncing.

The Smoker is one of the trickier zombies from the games, usually hiding in the background waiting for a chance to launch its long tongue at a survivor, restricting and pulling them towards it so that it (and other zombies) may attack the helpless victim. Its long tongue should be interchangeable, hanging loosely from its mouth or extended to attack one of your other toys – some kind of action feature is a possibility but as everyone hates those and I have no idea how to do it well, a sound feature should suffice, so that the nasty coughs and chugs of the zombie can be heard from many buildings away.

The Witch is possibly the scariest character in both games – a twisted, crying woman, sobbing on the ground, who snarls when distracted and becomes an unstoppable killing machine when bothered, . Drawing her attention on Expert almost always means instant death Like the Hunter, the Witch is crying out to be fully articulated so she can be posed (or played with) in one of her two common poses: on the ground sobbing, or on her feet flailing her limbs as she slashes her victim. 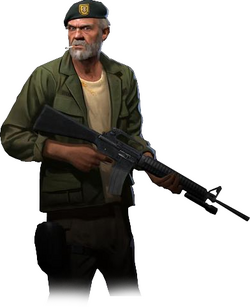 William “Bill” Overbeck is the oldest survivor in the series, a Vietnam vet who served in the US Army 1st Special Forces Group, usually seen clutching his Assault Rifle. Although he sacrified himselves for the other survivors in The Passing , he lives on as my personal favourite from both games, his wonderful drawl the perfect narration for the unfolding events. Bill must be fully articulated featuring his lit cigarette and with his Assault Rifle, Submachine Gun, Pistol and Med Pack. The pistol and med pack will fit onto his back, as will one of the two guns.

Francis is a biker, his arms and neck covered in tattoos, who hates everything. This includes, but is not limited to, airplanes, Ayn Rand, Canada, car alarms, elevators, flying, lawyers, trains, vampires, vomits, and the woods. Francis must be fully articulated with his Pump Shotgun, Auto Shotgun, Pistol and Med Pack. The pistol and med pack will fit onto his back, as will one of the two guns.

Louis was a Junior Systems Analyst at â€œFranklin Brothersâ€ in the IT department located in Philadelphia PA… until the second day after the first infection. Now, he kicks zombie ass, and keeps upbeat about it. Nothing’s gunna let Louis down. Louis must be fully articulated with his Heavy Machine Gun, Submachine Gun, Dual Pistols and Med Pack. The pistols and med pack will fit onto his back, as will one of the two guns.

Zoey never bothered studying during her first semester at college, instead staying holed up in her dorm watching old horror movies. Turns out she made the right decision, with all her professors dead and the campus overrun with zombies. Filling the all important female slot, Zoey must be fully articulated with her Hunting Rifle, Submachine Gun, Dual Pistols and Med Pack. The pistols and med pack will fit onto her back, as will one of the two guns.

That’s it for Part 1 – tune in tomorrow for Part 2, with a big bad Tank boxed set and figures from the sequel Left 4 Dead 2!!