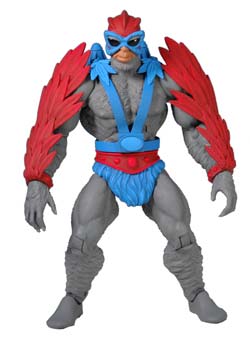 According to Mattel’s Facebook page, Stratos and the Adam Strange/Starfire two-pack are almost sold out, so if you’ve been holding off on ordering, now’s the time.

And now, may I say–Stratos is almost sold out? In four days? Really? Stratos? Wow. I mean, I’m sure he wasn’t produced in the same sort of numbers as Skeletor, but jeez…I guess the ol’ flying monkey man has more fans that any of us realized.

That, or MOTUC is really picking up in popularity, and collectors have learned their lesson about not waiting too long to order.