This is Part III of a multiple-part interview with Brian “Brian-Man” Stevenson of Spy Monkey Creations, conducted by PGPoA contributor VENENOR, about SMC’s brand-new toy line, theÂ Weaponeers of Monkaa. You can read Part I hereÂ and Part II here. –PG

VENENOR: It’s great that fans of the Weaponeers are taking to the evolution of the Crystal Gohlem. At the end of the Prologue we saw that the revived Crystal Gohlem accompanied the Stranger back to his world. I’m looking forward for that tale and the story’s progression.Â Iâ€™m especially interested since it could lead to a much more evolved version where he ultimately becomes fully Gearo.

Now, can you give us an insiderâ€™s view on the development process starting with the concept stage leading up to final product?

BRIAN STEVENSON: TheÂ entire process took aroundÂ 5 months. Thatâ€™s from initial concepts to final product on the table at Power-Con. In the early days of Spy Monkey Creations we wanted to makeÂ figures. They were going to be 3Â¾” scale and similar to the JLU figures. We scrappedÂ that idea because it was going to be too centered on customization.Â There reallyÂ didn’tÂ seem to be that many customizers out that could keep a line like that alive. From there the fantasy based weapons came about after demands from fans saw the early custom weapons we made for ourselves. Those did very well but as a company we just didnâ€™t feel comfortableÂ surviving by only producingÂ swords and shields for He-Man figures.Â There areÂ companies and groups out there, like ours, whichÂ fit into this mold as a third party company making stuff for other toylines.Â We just didn’t want to rely too heavily on another company and solelyÂ continue being third party because we wanted to build our own cohesive toyline.Â In order for us to really grow and become something thatÂ isn’tÂ considered third party we decided to take our next step. 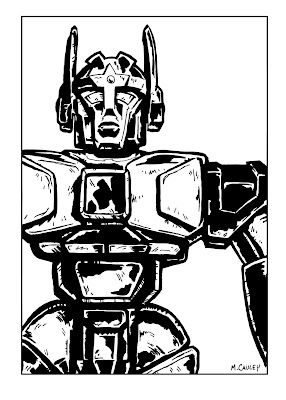 Some of the first sketches were very much like little stone and rock like creatures. The Glyos joints were still thereÂ but they were much more organic. They were elemental-type looking characters and had the look of being made of materials like wood and stone. We wanted them to have that squat build thatâ€™d give them that bulky 80â€™s He-Man vibe. As we started designingÂ the linesÂ became cleaner and crisper and they went away from beingÂ organic to being somewhat robotic/armored characters.

Between Jeremy and myself we probably had a dozen pages of concept drawings in each of our sketchpads. We shot over concepts to Matt Doughty of Onell DesignÂ to look over them and he sent us back some suggestions. We took some elements from what he suggested and merged them with what we were doingÂ and continued to evolve their design.

Palidarâ€™s head, for instance, is a variation of one of Mattâ€™s designs.Â Palidar kind of came from his idea and I reworked itÂ to betterÂ fit the Weaponeerâ€™s aesthetic. We were very set inÂ keeping the squat stance and we wantedÂ them to beÂ really large characters.Â The Glyos characters are around three inches and the Glyos-compatible Outer Space Men that the Four Horsemen are doing areÂ inÂ theÂ 3Â¾” range. It wasnâ€™t until the new Cyclops character that they had a behemoth. Thatâ€™s exactly what we wanted to with these; make them big and chunky with some really big build-able partsÂ within their design. Thereâ€™s lots of potential for big builds withÂ these parts. In their standard state they maintain plenty of poseability. They canÂ sit down and bend at multiple joints.Â By popping out the arms at the elbow and joining the lower and upper parts of the arms at the forearm peg-hole it gives you the affect that the arm is bent. The same thing applies to the legs to give the affect of a bent knee.

The conceptual design phase probably took around three to four weeks before we started committing anything to clay. At that point weÂ hadn’tÂ even developed Empyreus and Umbreus as characters. The original concept was going to be the Minions of Monkaa and they would be little minions that joined your 6-7â€ action figure lines.Â As our concepts progressed we decided that we wantedÂ our own main characters that are good guys and bad guys. We kept the initial concept intactÂ by keepingÂ minions which became the Gohlems. 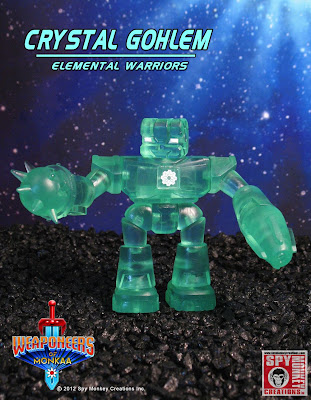 We started asked ourselves several question once we settled on having our own main characters. Why do we buy the figures that we do?Â Why do we, as older guys in our thirtiesÂ or older, buy little plastic men and put them on our shelves?Â  Itâ€™sÂ the nostalgia factor. We all remember the fun we had with toysÂ very vividly and fondly. Thatâ€™s whyÂ toys sell because thereâ€™s guys like us that buy them up for that reason.Â So before we started committing things to clay we looked at other toylines to find the reasons we wanted particular figures and what made them so cool and distinct.

All these toylines like Ninja Turtles, Super Powers, Battle Beasts, M.A.S.K., etc, from the ’80s that we collected and loved fondly gave us so many cool elements to work with. With all these elements we decided to mix them upÂ to see what we could come up with. While sculpting Empyreus weâ€™d look at him and say to one another how he favored multiple characters like Rodimus Prime and Crystar. We stylized a lot of these elements to work them into what we envisioned was the Weaponeers aesthetic. During the design and sculpting phase we were evolving these characters into whoâ€™d theyâ€™d become within our story. Jeremy and I spent three or so weekends sculpting and once initial sculpting was done heÂ took the parts for further revisions and refining. We probably traded a thousand emails and pictures between the three of us during this stage of theÂ sculptâ€™s development.

Once done, we sent them off to the factory for tooling but we had to rework them since the space within the toolÂ wasn’tÂ able to hold the amount of parts. At this point we basically had to go back and redesign them after we hadÂ just locked our designs down. With the changes completed we shipped them back and the factory took our sculpted parts and refined them so the planesÂ were level and the parts fit as snug as possible. About five weeks later we had our steel tooling cut and ready to go.Â Another five or soÂ weeks later we received the test shots, reworked those, shipped them back, receivedÂ the paint masters and andÂ had a few corrections on those to make.

All in all we can definitely relate to whatÂ we’veÂ heard before about toy companies needing a year to put product on shelves because with the Weaponeers, it took usÂ nine months. Add to that the fact that weâ€™re a three-man operation so the turnaround from us to the factory was quicker compared to big toy companies and the corporate hoops they have to jump through. Less than a week before Power-Con we had them in-hand just in time for the reveal. Along with the hard work and sleepless nights we put in a lot of love into this line so to witness the process from our initial ideas and concepts to the final figures in ourÂ hands has been great. To be able to hand these figures off to others and see how they enjoy them and create with them, knowing that we made that happen, has been really rewarding for us.

V: Based on Spy Monkey’s previous items I wasnâ€™t worried at all about what we were getting with the Weaponeers.Â They’reÂ definitelyÂ bulky and it gives the figure that 80’s â€œsquatâ€ build and heftÂ that you were looking to achieve. There are lots of lines along with angled shapes and edges.Â Looking back at SMC’sÂ resin weapons,Â there wasÂ more of a fantasy vibe compared to these more armored/robotic figures. Can we expect to see some of that show up in future figures?

B: Absolutely. This initial lineup needed to have parts that were as universal as possible. With the way our tooling breaks down, we can use the limbs of this lineupâ€™s figures but sculpt new torso and chest pieces to add variety to our overall parts library. We would love to do some hexagonal pieces thatâ€™d look like a big hex nut as a chest or rounded pieces that could double as wheels.Â This initial lineup doesnâ€™t confine the Weaponeers aesthetic at all; itâ€™s just what we focused on for this first drop. As we create bigger builds with parts from multiple figuresÂ in this lineup weâ€™re also coming up with ideas for parts that we canÂ add down the line. So as far as aesthetic goes for this line we can definitely delve into other shapes. Thereâ€™s plenty of wiggle room going forward.

Pic of the Day > Pressure_03 by Kwehttamm